The Real Value of Energy-Efficient Lighting

Tweet Facebook Twitter LinkedIn Google+ Pinterest WhatsApp Email Copy Link Your browser doesn't support automatic copy, therefore please select and copy the link from the textbox above and paste it where you need it. 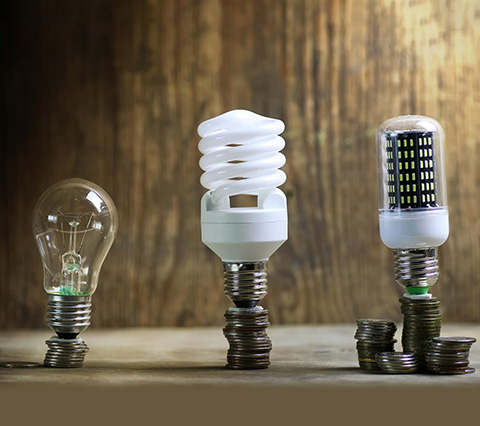 What is the actual value of energy efficient light bulbs?

Did you know that, according to the Department of Energy, about 10 percent of the average household's energy use goes to lighting costs alone? Though 10 percent may not seem like much, it does add up. An average house has 56 light bulbs and has the lights on for about 3 hours per day. With standard 60 watt incandescent bulbs, you're spending $660 a year on lighting.

There's a ton of content on the web concerning the potential savings you can get by switching to more efficient lighting, which is great -- but it can also be overwhelming. We've compiled that info to give you a quick and easy guide to keep you informed!

What are my options?
This infographic by GE uses statistics from the Department of Energy to explain a few different bulb options: namely, the old incandescents, CFL curli-queues, and newer LEDs quickly gaining in widespread popularity.

So, which is the best investment overall?
According to the Department of Energy: "One type that holds particular promise is LED bulbs -- they are six to seven times more energy efficient than conventional incandescent lights, cut energy use by more than 80 percent, and can last more than 25 times longer."

Everyone knows that LED bulbs are more expensive up front, but the cost to light the same standard house comes in at $550 less per year than using incandescent bulbs. In reality, your ROI is about six months, and they last up to 50 times longer.

This infographic gives some great perspective on the savings you can get by switching to more efficient bulbs:

As you can see, LED and CFL bulbs don't need to be replaced as often, and use significantly less energy. Beyond that, because they burn out far less often, they don't create as much waste!

If you're concerned about how the light will look -- a lot of us are pretty attached to our soft, warm incandescent light, LED lights also come in a rage of "light temperatures" now. They span from cold blue to warm white, which means you can get lights that mimic daylight to boost your mood, or warmer and dimmer lights to give your living space that homey feel, or give you the bright white light you need for reading.

What else can I do to reduce the energy cost of lighting my home?
Some homeowners have taken advantage of auto light switches which turn your lights out when you're not using them, reducing their energy costs even more. Combined with energy-efficient bulbs and you've got a super-efficient system, giving both your wallet and your power grid a break.

Some states' energy efficiency audit programs, like Connecticut's EnergizeCT, have light bulb upgrades to replace a certain number of incandescent bulbs with LED bulbs, which is another great reason to get an energy assessment. However, big-name home improvement stores have pretty great deals on LED lights if you're interested in a DIY option. Either way, upgrading to LED lighting is a pretty bright idea (yeah, we went there) for saving energy and money.


Tweet Facebook Twitter LinkedIn Google+ Pinterest WhatsApp Email Copy Link Your browser doesn't support automatic copy, therefore please select and copy the link from the textbox above and paste it where you need it.
The Energy Store is a Company You Can Trust!